Autumn is fast arriving. The leaves are changing colour and falling and there’s morning mist in the air, along with the occasional lovely smell of illegal bonfires. It’s wonderful when you unexpectedly smell something that takes you back to your childhood. For me, paraffin brings back the war years when I was evacuated to Wales and the only lights in the farmhouse were paraffin lamps.

I’ve been to a few of the “block buster” exhibitions currently on in London. I thought I would write about my reactions to two of them. If you’ve seen them please feel free to add your views in the blog.

Matisse was a great painter. (Not quite up to Picasso) However, his Cut Outs show at Tate Modern was a disappointment. While there were two or three powerful images, and I suppose you should be grateful if you finds even one piece in any exhibition that inspires you, the large majority of the works on display were more or less nice designs, akin to wallpaper.

The Malevich show, also at Tate Modern, was an even greater disappointment. At a particular moment in history undoubtedly his work had significance, but in reality it doesn’t stand up as great art. For example, his “revolutionary” black square has no power. There’s nothing of the strength of the New York Abstract Expressionists, Newman or Rothko, or the beauty of Joseph Alber’s Homage to the Square series. This is an example, I think, of university-educated curators making the mistake of thinking historical significance is the same as good art. Art isn’t an academic subject.

I was planning on going to the Constable exhibition at the Victoria and Albert Museum yesterday, but the queue for tickets was too long and I needed lunch. I’ll try again next week, and also I’ll go to the Late Turner exhibition at Tate Britain. Expect a report in a future blog.

I’ve been working on a new painting, in between looking at other artists work, and thought I would show you what it looks like at this early stage. As you can see, there is much still to be done with it. 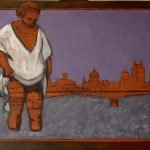