Three more block buster exhibitions and a five star movie. How much can I take in such a short time?

I want to talk about the film first because I just saw it, but that would be getting ahead of myself and I’ll keep you in suspense about my opinion of Mr Turner, the movie. So the exhibitions in the order I saw them.

Constable, The Making of a Master, at the Victoria and Albert Museum.

A fine and satisfying exhibition using the work from the V & A’s own collection mostly but some other pieces I wasn’t so familiar with. It was good to see the full size “sketches” along side the “finished” paintings. The so-called sketches are powerful and have a remarkable energy. The brushwork is raw and fresh and, if they were painted today, would be considered finished. I’m sure Constable preferred them as they were but again I’m sure he felt he had to produce a more acceptably finished painting that would be certain to be hung by the Royal Academy. These more finished pieces are masterfully painted but don’t have nearly the power of the first concept.

His studies of clouds, vegetation, farm machinery, and animals are a lesson in observation and draftsmanship. His approach to drawing was scientific. He wasn’t making art, although the drawings are beautiful, he was discovering, through his drawing, how the world worked, much as Leonardo did.

I will probably revisit the show before it closes on 11th January.

I find it difficult to understand, given the enormous collection of work bequeathed to the nation by Turner and housed at the Tate, how the curators managed to produce such a dull exhibition. There are too many paintings crowded into rooms with the wrong colour walls. Turner wanted his paintings shown on dark red walls. Only one room uses dark enough walls that bring the paintings to life. There is no doubt that Turner was a bit of a pot-boiler, or perhaps an obsessive, and painted many almost identical pieces over and over. Most great artists are guilty of this. But the curators should have known better than to hang half a dozen of them next to each other. What were they trying to prove?

I enjoyed the water colours but fewer really good ones would have been better. In this case, as with the entire show I think, less would have been more. I wonder if the curators actually can’t tell which Turners are really great and so play it safe by including too many.

I do wish that they hadn’t included Turner’s death mask. It reduces a great man to a toothless mummy. Unfair and gratuitous. I probably won’t be going back even though the show continues until 25th January.

Rembrandt, The Late Works, at The National Gallery.

There isn’t much more to say about this exhibition other than, it is truly magnificent. It puts together the best of the master’s work, his self-portraits, his group and individual portraits, his etchings and dry point prints, his landscape drawings, and hangs them beautifully.

You are lead through the show from room to room finding wonderful paintings, drawings and prints at each turn. Here is bravura brushwork and a “to hell with the consequences” attitude.

The first self portrait you see, which is on loan from the National Gallery of Art in Washington DC, stands out as one of the greatest pieces of painting ever done. It is far more moving than the Mona Lisa. If you do as I did, go around the corner to the National Portrait Gallery after seeing the Rembrandt’s, you will realise what a lot of truly bad paintings hang on their walls. Not a sign of any understanding of composition in sight from these imitators of bad snap shots.

I will definitely be going to the Rembrandt exhibition again just to look more carefully at a few of the pieces. The show continues until 18th January.

I have just started, a homage to Rembrandt’s Woman Bathing in a Stream. The stream in this case is the Thames with a view east to St Paul’s. I’m including it with this blog. 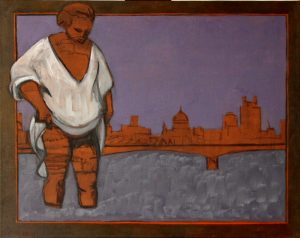 I saw this movie yesterday and came out of the cinema feeling disappointed. I am now, as I reflect on it, feeling much more positive. It’s undoubtedly a bit too long and suffers somewhat from a single mood feeling through out. But there are little things that the director and the actors do which take time to sink in (at least it takes me time) and give you an understanding of a man obsessed, politically astute, generous and mean, a misogynist and lover of women. A sensitive and moving portrait of a father son relationship. Timothy Spall, who plays Turner, produces a gentle and subtle portrait of a great painter.

One amusing part of the film, towards the end, shows Turner’s reaction of disgust to the Pre Raphaelite brotherhood paintings included in the Royal Academy annual exhibition. I agree with Turner and Mike Leigh.

This is not an ‘in your face blockbuster’ which we have become used to, and come to expect. In my now considered view I would give it at least 4 stars and perhaps as time goes by I might even give it 5. 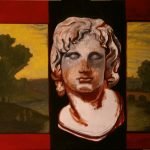 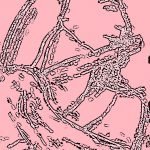