Just got back from a lovely afternoon’s visit to Tate Britain with a former colleague and friend of mine.

The Walter Sickert exhibition, which was the main reason for visiting the Tate, is excellent. It’s very extensive and will give anyone, who seriously wants to spend time looking at the work of one of England’s most important and innovative painters, many worthwhile hours of pleasure. My only complaint is that the catalogue is only in hard back, it’s very heavy, the reproductions are poor and the cost is excessive so I didn’t buy it

Before looking at the show my friend and I spent an hour or more in the member’s lounge having lunch and talking. Paul is an art historian who, though officially retired, is still teaching art history at the University of Cambridge. We had fascinating discussions about changes in student group personality pre and post Covid, and issues such as ‘trigger warnings.’ More on that perhaps in another blog. What I want to concentrate on here and now is the exhibition.

When I look at Sickert’s paintings I am immediately transported back to my years at Camberwell School of Art. His work was a major influence for me personally. The most important painting in the show is Ennui. It is included in the exhibition with little fanfare and given no particular pride of place. Nothing is said by the curators about the mastery of the painting, Instead we are told about the subject matter and what they believe is its meaning. So my advice is to ignore most of the curators little messages beside the paintings and just look at the works. Mind you the little messages do show you the various locations in which the paintings normally reside. I had no idea that so many worldwide galleries collected his work. Confirmation of his international importance.

What can’t be dismissed is the influence of titles. A painting depicting a fully dressed man sitting beside a nude woman lying on a bed can provoke different responses depending on the title. If it’s called Camden Town Murder there is one response. Call the painting Sunday Afternoon and an entirely different response is evoked. What was important for Sickert was the relationship of two figures, one clothed and one nude.

The big strength of the exhibition is that we are shown clearly that, though he repeatedly painted the same subject, he approached each painting as something new and untried. He was always searching for something different.

I include one of my paintings; Rain in the Park, from my days at art school. If you manage to go to the exhibition you will see how Sickert influences my student piece. Apologies for the creasing on the paper.

Rain in the Park 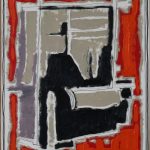 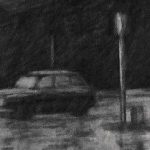