A romantic view of a woodland in central France on the route of the first Crusade. I followed this route as part of my research into the landscape of the Crusades. It should be made clear that this journey of the Crusaders was horrific for the residents of the towns they passed through. Whether in France or later, when they crossed into Italy. It wasn’t a disciplined march but a mass of marauding, uncontrolled people who were following the command of the Pope. They saw their task as ridding Christendom of all who were not Christian. If you were Jewish, and there were jews who had been living in that part Europe since Roman times, you were slaughtered after first being tortured or raped.

It is a Mezzotint print. You can see a short video of me pulling a mezzotint print if you click on the link to my biography. Look for Jam Session. 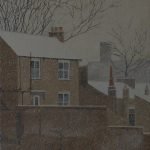 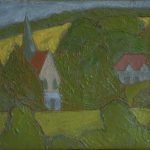