Has 2019 been a good year? It certainly has been sensational.

On a personal level, it’s the year of my eightieth birthday and of my first solo exhibition in London for more than thirty years.

On a national political level, the issues of Britain leaving the EU, the general election, and the concern of many Jews that politically sanctioned anti-Semitism will become the norm if the Jeremy Corbyn led Labour Party gets into power.

On the level of the creative arts nationally, and probably internationally, I worry about the pressure to approve only the art, the history, and even the science, which is seen to be on the ‘right side’ regardless of merit.

It’s the issue of the creative arts that I want to talk about and question.

I want to question it because I used to believe that the creative arts was one of two places that we could expect to have those widely agreed ideas scrutinised and put to the test. It used to be that universities were the other places that questioned accepted ideas. It seems that that’s no longer true.

Pablo Picasso, undoubtedly the most influential artist of the 20th Century, made a painting about the atrocity of the bombing of Guernica, a small town in Spain.  Guernica, his painting, is considered to be Picasso’s masterpiece. In my view it isn’t a masterpiece. Many of his non-political paintings are far better.

Standing in front of Guernica when it hung in New York at the Museum of Modern Art, as I did, I hoped, and genuinely expected to be moved by it. But I wasn’t. It didn’t have nearly the impact of many of his other paintings or of the paintings of his fellow Spaniard Velasquez. I urge you to look at Las Maninas at the Prado in Madrid and to do the same with Guernica, which is now at Museo Reina Sofia also in Madrid. Then you tell me which of the two pieces is the real masterpiece.

I believe what made people think that Guernica was a masterpiece was the political issue.  It relies on the story behind the painting to give it impact. When the story ceases to be part of the public consciousness the impact will be forgotten.  Las Maninas is not a painting about an issue or of a time. It is a timeless painting. Concerned with depicting a family. You need know nothing about the family or the events of the time that it was painted to appreciate it. In my view, it is probably one of the greatest paintings ever made.

The same will be found to be true of a lot of the so-called important art, theatre, novels, films, and TV.  I’m referring to that which is presented to us as profound and even great, that only address the current events. The quality of the work is overlooked because the issue has become paramount.

Any painting of Grenfell Tower will be considered a masterpiece no matter how bad the painting. A play written by someone underprivileged will be considered a masterpiece of theatre because an underprivileged person wrote it. It will be thought to be even better if the writer is academically challenged, and greater still if the playwright is a member of an oppressed minority.

Just this minute I watched on TV the award of the Turner Prize. The fact that the four practitioners who were chosen as finalists each produces “art” which is concerned with the political and social issues of today is proof that only work on the ‘right side’ is worthy of consideration.  I have no idea of the quality of their work. I only know that the jury agreed to give the prize to all four finalists. The finalists chose to form a collaborative rather than compete with each other. That isn’t a bad thing since I’m opposed to competitions in the creative arts. However, the question remains, why did the jury select a group of practitioners who are so obviously making statements which are entirely concerned with current issues? One more twist in the tale is that the prize was presented by the editor of Vogue Magazine. Vogue is a publication that is entirely about the fashion of the moment and not about art.

We need to step back from the momentary issue and really look, read and listen. We need to ask ourselves how does this stack up against those things which we know to be great and have stood the test of time and not the test of popularity.

The next time that you see a dog walking on its hind legs you might find it delightful and praise it, but you must ask yourself, “Is this as good as Rudolf Nureyev?”

I’m interested in knowing how you personally judge what is good in the arts; should relevance be the criteria?

I’m working on the new series of paintings for my next big exhibition in 2021. 2021! That’s confidence. The one shown here may be one of them.

Happy Holidays and enjoy whatever celebration you prefer. 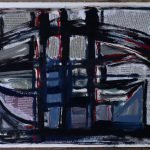 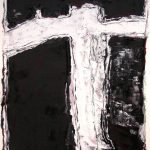