Sumo wrestling is a sport that is built around ancient rituals which stem from elements of the Shinto religion. The forms and rituals culminate in a short battle between two wrestlers. It is a trial of strength between the two men. Before the actual conflict they perform a ritual dance and throw salt in the air. I have used some of the visual elements that are present in and around the Dohyo (the wrestling ring) in this work to create a pattern that fills the rectangle. 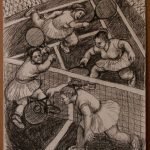 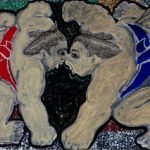