This is an early sporting work. I photographed the painting in black and white because I happened to have black and white film in my camera. I should explain that it was many years ago, long before the advent of digital cameras and home computers. So the only record I have of the work is a black and white print. I have long since lost that print but happily, after I had scanned and downloaded it to a computer, I still have the image. It’s the only record I have of the painting. The painting was sold right after I took the black and white photo. I had intended to photograph it in colour on a 35mm slide but things intervened and I never did get around to it before the painting was delivered to the new owner. I can’t remember who I sold it to. The only thing I do remember is that it was eight feet wide, at that time, the largest canvas I had painted. 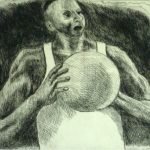 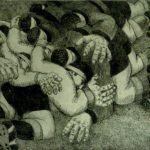