This gentleman approached me after seeing my work on the website. He had been working abroad for some years with his family and had a series of portraits painted of them. He had not had a portrait of himself painted to round off the collection. He wanted one to hang with the others. After visiting my studio and looking at the sort of thing I do and how I worked, we came to an agreement and I produced this portrait. I used photographs and drawings of him sitting in his home to make the work. The painting was made entirely in my studio and he didn’t see it until I brought it to him completed.

I asked him to wear a shirt that he enjoyed and we spent a lot of time talking about his life and work while I drew him. I was particularly taken by his hands and how he used them when he talked. I wanted to create a 3 dimensional effect with his hands coming towards the viewer in front of his shirt. In effect defying the two dimensional reality of the canvas. The advantage that a painting has over a photograph is that I can place the sitter where ever I wish. In this case I put him in his garden, in front of some rose bushes although he sat for me inside his house. 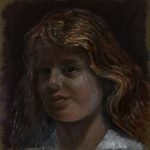 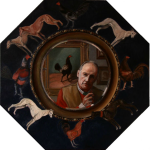