For the benefit of those who aren’t familiar English geography, East Sussex is the county south of London boardering on the south coast of England. It includes Brighton which is where Londoners used to go for their weekends, and longer holidays, in the summers of the 1950’s to the 1970’s. That was before many of us went abroad for our holidays. So East Sussex was the countryside with which I was very familiar as a child. This is why it appears in many of my paintings even though some of them might not be titled as East Sussex. That county includes the South Downs National Park. which is an area that has been largely neglected by painters.

This painting is a depiction of a fenced area in the National Park. I introduced the dark sky because it is a common phenomenon in that part of the world due to the proximity of the sea. A dark sky combined with sunshine has always excited me. 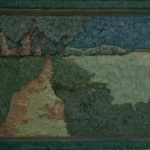