Taxi too the Station After a Night of Blitz

This is one of my “memories of the war” series. We lived in London until the German bombing became so bad that my Mother whisked my Grandmother, elder sister and I off to Wales as evacuees. (our father was in the army) I was probably about two or three years old and have a vivid memory of sitting in the back of a taxi beside my mother while we drove past burning buildings. We did this more than once because my Mother and Grandmother didn’t want to be in rural Wales, where she said, “They don’t know there’s a war on”. So we would be given a billet for a few months and dragged back to London again. This would be repeated numerous times. We never went to the same place twice in Wales because our billet would be assigned to another family. 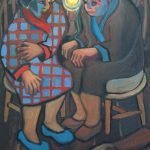 In the Cupboard Under the StairsPortraits & Figures