In the Cupboard Under the Stairs

The cupboard under the stairs was supposed to be the safest place if the house was bombed. If you look at a bombed house you’ll see that the stairs seem to remain standing even though the rest of the building is wrecked. Anyway that’s what the government told the citizens of London during the German blitz of the Second World War. When the air raid sirens sounded in the middle of the night we all trooped to our Anderson Air Raid Shelters in our back gardens or, if it was cold, we would squeeze into the cupboard under the stairs. This is my memory of my Mother and Grandmother in their dressing gowns and slippers waiting for the “All Clear” to sound. The rifle on the floor is my memory of my father coming home on leave and leaving his rifle in the cupboard. It was very heavy. I was three and remember secretly trying to lift it up and dropping it on my foot. I daren’t yell. My foot was painful for days afterwards. 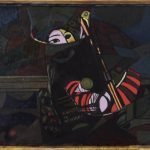 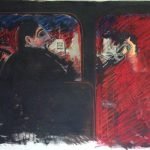 Taxi too the Station After a Night of BlitzPortraits & Figures