I first saw Valerie performing in a play at a pocket theatre above a pub in Clapham. After the show, when we were all downstairs having a drink, I spoke to her and told her that she was beautiful and I would like to paint her. She agreed and we made arrangements for me to visit her at home so that I could start working on ideas for the portrait. I always prefer to work with the sitter in their own environment, rather than in my studio. Valerie is tall and has modelled as well as performed on stage. She knows how to take up a pose. She tried on many of the costumes and hats that she owns and we settled on this simple black outfit and a pink hat. While we were in her kitchen and she was making us a cup of coffee, she opened the back door and a shaft of sunlight lit the lower part of her dress. I told her to stop there and made some quick drawings and took some photographs. I then made the portrait in almost one session back in my studio. It virtually fell off the brush. 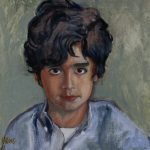 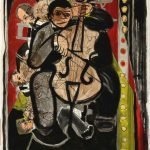