I was fortunate to be in London in 1991 when, for the first time, the entire Sumo ritual was brought to the Royal Albert Hall. I couldn’t get tickets because they sold out in minutes. However it was shown on TV and I watched avidly. Sumo wrestling is a sport that is built around ancient rituals which stem from elements of the Shinto religion. The forms and rituals culminate in a short battle between two wrestlers. It is a trial of strength between the two men. Before the actual conflict they perform a ritual dance and throw salt in the air. In this image I have taken an imaginary view from above in order to fill the rectangle of the paper with these giants battling against each other while locked in an embrace. 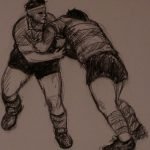