I should talk about the Goya exhibition I recently visited at the National Gallery. The curators did their usual thing and selected the most boring pieces of Goya’s portraits to show. The four small self-portraits were really fine, as one would expect, but the rest of the show was cobbled together to make a large enough group of paintings to justify charging an exorbitant entry fee. Public galleries and museums should think twice before creating a “block buster” when the quality of the work they have available is second rate. Is it a just a money-spinner? Heaven forbid that they should sink so low.

As you can see, I am becoming less concerned about offending. I now feel free to say something critical about something that doesn’t work.

My paintings have changed from being primarily subject based (by that I mean they were depicting something visual (pre pictorial) that I had experienced) to works in which I now attempt to make concrete those things which exist only in my mind.

My mind images, as I call them, are made up of memories, experiences, feelings and desires, and many other things. Some are not even images.

It is inevitable that paintings, which use memory, should have something of a recognizable subject in them, but these subject-based images are there almost by chance; just as a thought or an idea might appear by chance.

It is also inevitable that attempting to put something like a mind image on canvas, to fix it in time when it is constantly changing, is simply out of reach. This is by way of attempting to explain something that, perhaps, should not be explained.

Searching, that is the image I included with my November blog, was the first of the new pieces. The next, A K D is included here. 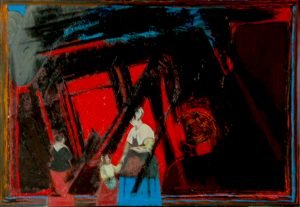 Just by the way, Searching has since changed and I will probably include it again in a future blog when I’m sure it’s finished changing.

I wish you joy, in what ever you celebrate, and a very happy and fulfilling 2016 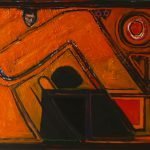 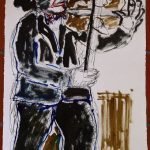